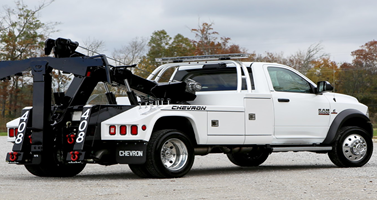 Yes, you can tow an automatic car on a frame. There are a couple of paths of towing a car; by towing it with two or all of its wheels on the ground while it trails behind and tired to the towing vehicle or by being mounted entirely on the flatbed of an open truck such that it is being transported without any need for its tires to touch the road, which is the best and safest method.

In automatic vehicles, the engines are said to generate the hydraulic pressure that supplies fluid throughout its transmission for use as lubrication.

If the engine is not running, and the engine still turns either the driveshaft or the drive axles, the transmission system could suffer significant harm in the process.

Some of the ways to tow an automatic car are by shifting it into the Neutral mode of the gear lever, by using a car dolly meant for front-wheel-drive and all-wheel-drive cars, and through the use of a tow bar and hitch for rear-wheel-drive vehicles.

All in all, your vehicle should be towed while it is in the Neutral position and must not be towed across any distance exceeding about 15 miles or 35 kilometers at a speed, not more than 25 miles per hour or 40 kilometers per hour.

Read Also: Can You Flat Tow A Porsche Boxster?

Not all automatic cars can be towed on a frame, which depends on the oil feed to their gearboxes. As a result, many automatic gearboxes lock their clutch plates while in motion, which could wreck it if used on a frame. Should you tow automatics, you are likely going to overpressure the gearbox oil and blow its seals too.

Why should one tow an automatic car on a frame?

It is common to tow an automatic car on a frame because if you tow it while its wheels are on the ground, there is the possibility of damage to its transmission system particularly when that is done wrongly.

To flat-tow an automatic transmission vehicle, you should abide by the recommendations in the owners’ manual strictly. By doing this, you are more likely to protect its transmission system from any harm since you are essentially preventing its engine from turning any of its parts that could get damaged in the process.

Is it safe to tow an automatic car on a frame?

Yes, it is safest to tow an automatic car on a frame as against towing it in any other way. This is primarily because while towing an automatic vehicle with either two or all of its wheels on the ground, there is a pretty good chance that you can easily make a mistake that can result in damage to certain vital parts.

On the other hand, if you tow it on a frame, you are essentially reducing or eliminating the chances of any mistakes and possible damage. So, yes, it is very safe to tow an automatic vehicle on a frame.

Read Also: Can You Flat Tow A Lincoln MKX?

How can I tow an automatic car on a frame?

Not all automatic cars can be towed on a frame. This depends on the oil feed of the car to its gearbox. Mostly automatic gearboxes lock the clutch plates whenever they are on the move, which can affect their gearboxes should they be on a frame.

This means that if you tow automatics, you are likely to overpressure their gearbox oil and thus damage the seals in the process. The basic rule of towing on a frame is that if the trailer has a weight of up to about 750 kg, it may not need brakes, even though the brakes must be functional if there are brakes installed when it weighs less than 750 kg.

Therefore, its brakes need to be in perfect working condition, even if they may not be used while towing, just in case. As long as the combined weight of the frame and car does not exceed 3500 kg, you are legally permitted to tow as far as the brakes are working well.

Several ways of doing this are popular. One, some A-frame systems can electrically operate the towed car’s braking system whenever you operate the brakes in the tow vehicle, a condition that does not apply to a broken down car.

As a precautionary measure, the A-frame and car should both brake to a stop whenever they become detached from the tow vehicle while still in motion.

When this happens, the tow hitch or the drawbar must be stopped from touching the road, while the frame and the car should maintain some kind of residual steering. It is the same as when you are towing a trailer.

In this case, the tow vehicle must provide the car with electricity such that its lights would function properly whenever it is dark on the road. Although the plate number of the towed car will be fitted, they still must be covered by the number plate of the tow vehicle when it is attached to the frame.

Will towing an automatic car on a frame damage my car?

No, towing an automatic car on a frame will not damage your car. As a matter of fact, it will only protect your car from possible damage to its transmission system if it were towed in other ways.

Read Also: Can You Flat Tow A Pontiac G6?

Whenever you tow a car on a frame, you are essentially removing the chances of any potential damage that may happen to its transmission system in the event of a mistake while towing.

In essence, towing on a frame presents you with a lot more benefits than all other conventional methods through which you can tow a car with automatic transmission systems.

Can you tow an automatic car without a frame?

Yes, you can tow an automatic car without the aid of a frame in what is called flat towing. Flat towing is when you hook up the vehicle to be towed to the towing vehicle by the use of a tow bar or any such means that will enable it to tag along.

However, while towing in this manner, you should be very conversant with certain facts. First, although it is possible to flat-tow an automatic transmission vehicle while its gear lever is at the Park position, it is better to engage it in the neutral position in order to protect the transmission system of the vehicle.

Second, its engine must equally be running too with an experienced driver to control all its movements throughout the towing.

Can you tow a semi automatic car?

Semi-automatic cars are primarily a little bit different from either manual or even automatic cars. As a result, it is imperative that you know how it works. These cars are basically half-automatic, so to say.

For this reason, they have what is commonly called a ‘flappy-paddle’ gearbox. Semi-automatic cars can be driven just like the fully automatic types with no need for manual gear changes whatsoever, although you can also control them manually too with the aid of the manual paddles on either side of their steering wheel in order to change the gear.

Semi-automatic cars give their drivers the option of controlling gas supply to the engine manually, which in turn accords extra control and a smoother drive too. On the contrary, in automatic cars, the gears are always automatically changed for you. Notably, semi-automatic cars are said to be both jerky and also have a kind of ineffective gear changes.

Yes, you can tow a semi-automatic car much like any other car. To be able to do that, you should first, leave the car in the Drive gear position and it will have to change its gear without any interference from the driver.

Just like with other modern cars, there is a manual override that uses the gear lever or the paddles behind the wheel. The best DSG-style systems change gear conveniently and quickly too.

Can you tow a trailer with an automatic car?

Yes, you can tow a trailer with a semi-automatic car much like you can do so with any other car too. However, in this case, just like in all others, you must make sure of certain things too.

First, make sure that the weight of the trailer does not exceed that of the car. Second, do not drive at speeds in excess of what is recommended by the manufacturers while towing. Finally, make sure that you use the correct tow bar and keep to good roads as much as possible, where you could do so.

Conclusion – Can You Tow An Automatic Car On A frame?

Automatic cars, just like all other cars can be towed in any of the ways vehicles are towed. However, there is a little difference with regards to how you should tow automatic cars.

For example, if you are towing an automatic car, it is best if you choose the Neutral position of the gear lever, although you can tow them even when the leaver is in the Park position, this may harm your transmission system, and hence, it must be avoided altogether.

In addition, you also have the option of towing automatic cars on a frame too, albeit with some peculiar conditions also, but you can do it, and satisfactorily at that as well.